“When the shit hits the fan you’d rather be the fan than the shit.” – Falopians 2:83 (No offence Ladies)

.
Be advised: there’s a few updates you can’t miss after you read this post at the bottom. I’ve been watching the fallout from the Boston Bombing with great sadness and a deep personal interest. I have made a few observations, and that’s all they are. I will outline them below.

Please bear in mind this is just a theory, a hunch. But if it looks like a bus, and drives like a bus, it’s probably a erhhm.. bus. I am simply presenting facts and backing up with evidence. Your conclusions are your own. So, I have kinda had my spidey sensors out and all over this since the atrocity occurred and I started to get a whiff of something very stinky.
And it goes a little something like this.

Suspect Number #2’s twitter account is by now very well known, in case you have been living on the moon –  it’s @J_Tsar – So first thing to take note is a tweet sent from Tsarnaev to an as yet unidentified twitter user, who deleted his account immediately after Tsarnaev’s identity was released which was sent SIX MONTHS BEFORE the April 15th Boston Marathon, on August 10th 2012. The tweet indicates that there was at least 6 months planning went into this, and multiple personalities where at least aware of ‘shit about to go down’.

Three weeks before the attack on the 15th the surviving Boston Bomber, Tsarnaev had the following conversation with some of his buddies. They all live in and around Boston MA and study together. Things to take away from this exchange is the timing along with the fact that they were talking about ‘fireworks’ that ‘can do some damage’ and (sic) ‘fuk shit up’ it’s also worth noting that from the conversation we can deduce that there had been some previous ‘tests’ from the phrase ‘I got some more left’.  Here it is 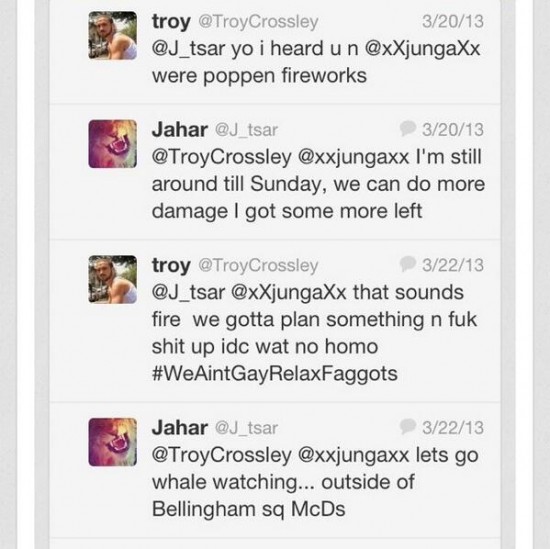 So fast forward 6 days after this conversation happened a report came out regarding an incident not 30 minutes away from UMass where these kids ‘study’ involving unidentified explosions. The location sits between Dartmouth and Boston.

” The first incident was reported at 8:34 p.m. on March 12. Police and fire personnel responded to the area of Pine Street and Tower Hill Drive. Witnesses at the nearby Target store on Washington Street reported seeing a bright flash and hearing two explosions from that area. Several unexploded devices were found at the scene and later detonated under secure conditions by the State Police Bomb Squad.” Full Article here

Okay lets look at the people in the original exchange. Three main players:

It’s all still rather sketchy right?

Okay – finally lets take a look at @XxJungaxX – Well on the 7th April, a week before the bombing this guy tweeted the following:

And this is where it gets very interesting.

You see I posted the following tweet out, drawing attention to these unfortunate coincidences: 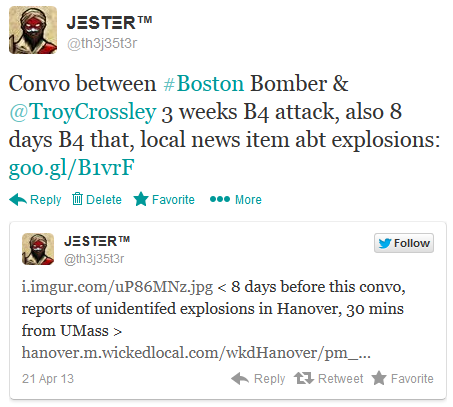 Not to mention a shit load of other accounts too.

I know…. its still nothing right?

Well here’s where I get all Lemony Snickett:

By total happen-chance @XxJungaxX, whose full name is “Junes Umarov‘ happens to share his surname with none other that ‘Dokku Umarov‘ who by total chance also happens to be the leader of the Causcus Emirate Terror organization. I mentioned him back on the 20th April:

Also it’s pretty clear that these two recognized their buddy on TV BEFORE the MIT Police officer was shot to death and yet failed to notify the authorities. Thus complicity at least.

And perhaps the most telling is a conversation that occurred on twitter immediately after the bombing on the 15th April. Here it is: 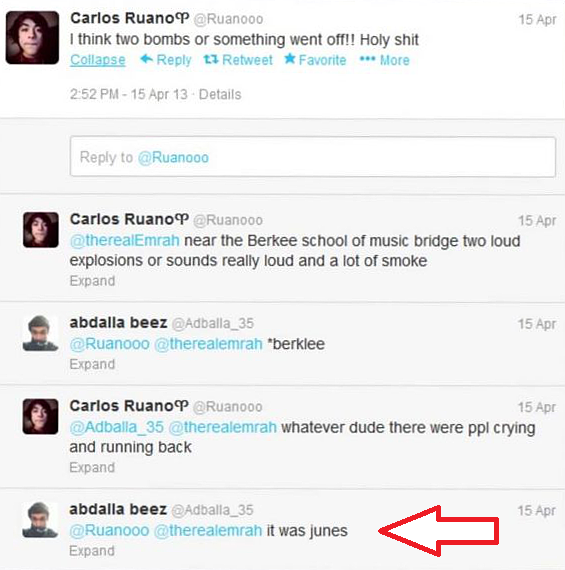 Update: Predictably @Adballa_35 has now deleted the ‘It was Junes’ Tweet, but here’s a link to his previous one

I wouldn’t want to jump to any conclusions or anything. But am just merely pointing out some observations. Obviously this is all just a series of unfortunate circumstantial coincidences. It’s probably nothing. Right?

Upon deleting / deactivating your account, Twitter gives you 30 days in which to reactivate it, incase you change your mind or suddenly realize that deleting your account makes you look suspicious.  @XxJungaxX  has just re-activated his twitter account and is continuing the totally insane ‘#FreeJahar’ campaign alongside @TroyCrossley, in an attempt to prove that the brothers were framed by the government/US Navy SEALs.

Because that’s highly probable. Not.

UPDATE 04/22/2013 @ 1615pm:
@XxJungaxX << And he’s deleted it again. Ftw. And it looks like ol’ @TroyCrossley is limbering up, getting ready to delete his twitter account too, and then predictably blame it on the government too:

See how they run. Like cockroaches when the light goes on.

UPDATE 04/22/2013 @ 1735pm:
@TroyCrossley is desperately trying to point the finger at some dudes that look like they may be Mil/PMA/SEALs. We have to ask ourselves only two questions. Given the rest of this blog post, why exactly is he trying so hard to deflect the attention away, and also:

Riddle me fucking this @TroyCrossley, if as you say  the two mil guys blew up their rucks, and they were responsible, how in the name of Zeus’ butt-hole are they holding them immediately after the blasts: Click here to see full resolution

BTW They are National Guard and it’s perfectly common for guard troops to get activated to support a public event. The guard belongs to the state governors. But it seems to me, given the FACTS as I have outlined in this blog post, that @TroyCrossley and his buddies have every reason to try and get everyone thinking it was anybody BUT his friend, Tsarnaev.

@XxJungaxX << And he’s reactivated his account again. He’s so indecisive. Just in case he or in-fact any of his buddies decides to delete tweets or accounts again here’s a link to all their respective historical tweets, because on the interweb, you can’t delete, only hide. For example here’s an interesting tweet:

“@SalamAlacomOsam:@xXjungaXx Ill wire the money to you, When we going to Russia though?lol”

UPDATE 04/23/2013 @ 1744pm:
We have to ask ourselves WHY these two terrorist sympathizers are so intent on ‘proving’ Tsarnaev’s innocence, even though he already confessed and evidence against him is overwhelming. They are willing to just make shit up in their little crusade. Below we see Troy, having to ask who Chris Kyle is, and then miraculously 6 minutes later, Chief Kyle is now implicated in their crazy fucking bullshit. You are going to hell for that one Troy boy.

Now almost a year after the attack. It seems my interest in the Umarov clan was pretty much on the money, just days after the bombing because: Tuesday March 4th 2014 – Feds Searching for Friend of Boston Marathon Suspect, ‘concern’ over Chechnya Trip

This female happens to be Heda Umarov – Junes’ sister.

#Hint: I’m betting the Dojo in MA, that most of the Umarovs were members of acted as a surrogate Mosque and is possibly where the bombing was planned.

Remember, Remember the 6th of November

Picture of an ‘Anon’ In His Twilight Years

9/11 – While we’re NEVER FORGETTING – are we forgetting something?

JΞSTΞR’s Loadout: The Blackphone. The Review & an Insane Giveaway Gamble

Jihadi Bloopers. Online and Off.

CIA Director Brennan AOL ‘Hack’ – What You Need To Know